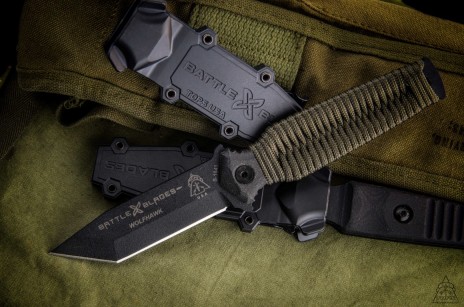 Whether you are Military, Law Enforcement, or an outdoorsman, this system mounts anywhere a rail does, including your rifle, vest, belt, bike, ATV, etc. (pat. pending).

Whether you are Military, Law Enforcement, or an outdoorsman, this system mounts anywhere a rail does, including your rifle, vest, belt, bike, ATV, etc. (pat. pending).

"To whom it may concern:
Combat readiness, weapon selection, ease of use, are not just words to be used in the movies. On the battlefield when it really matters the words have meaning and save lives. These are the words I would also use to describe the best combat knife I have ever used, the MP4 Wolfhawk. The MP4 Wolfhawk mounts securely and effortlessly on the side of any rail system. The Wolfhawk mounted on the side of my M4, sits within easy reach, and within my field of vision. Understanding that seconds count, the MP4 Wolfhawk, helps complete the definition of combat readiness, weapon selection and ease of use."

"To whom it may concern:
We here at Quality Arms Idaho are always looking for new products to enhance the AR Platform. In our opinion the MP4 Wolfhawk Knife System for mounting on the Picatinny Rail for the AR is one such product. Not only is it made tough with its superior steel and construction, it is a US made product and the quality is far superior to those cheap knock-offs. Being made in Idaho is another reason we at Quality Arms Idaho recognizeBattle Blades, in conjunction with TOPS KNIVES, as a superior, high-quality manufacturer. We will be releasing the Battle Storm series of weapons shortly and the Battle Blades Wolfhawk Knife System will be prominent."

You can quickly see on close observation that Kelly has the look of a man that has lived his lived his life out-of-doors. In his case, the Rocky Mountains, USA. His quiet manner may initially fool some; however, there lies behind this quiet demeanor, a man who has had a world of real action experiences. Discussions with him over several weeks highlighted some very interesting parts of his almost 60 years. He is now a semi-retired rancher in the Rockies, and although not running a ranch at present, he spends a great deal of his time and energy developing his 'Battle Blades Project.'

Looking back several years, Kelly grew up in the mountains trapping, hunting, and fishing. As a young man, he adopted and trained wild mustangs (wild horses) and spent years as a wilderness guide running hunting, fishing, and pack trips. He helped various scouting groups when time permitted. Kelly is a pilot and he has spent time as a big game hunter with both rifle and bow. It is important to note... Knives always played an essential part of his daily life, regardless of the activities he was involved in.

A great influence on Kelly came from his father who fought in World War II at the Battle of the Bulge in an army machine gun squad. Kelly gained a great respect and admiration for the US military. Although Kelly did not have the resources to fund a wounded veteran type of foundation, he decided to put his 'Gun-nut hobby', coupled with his imagination, to create a product that would directly benefit our military men and women in the field. Looking through numerous gun magazines and owning several AR-15, M-4 type weapons of his own, it seemed to him that one could buy almost anything to mount on a Picatinny Rail, but not a knife! AN ALL IMPORTANT BACKUP TOOL.

So he started building crude prototypes. He spent a great deal of time talking with and getting input from military friends. He was convinced that a need existed for a rail mounted combat and sporting knife. Being the case that if a soldier or outdoorsman becomes separated from his equipment, on occasion, his knife would be gone also. With the Battle Blades system, as long as the has his primary weapon, he will also have a knife to help with a variety of situations that may arise.

With the encouragement of his wife Kami, family, and friends he went forward with the 'Battle Blades Project.' Kelly had no experience in manufacturing and as a result, made several mistakes. He recently met Mike Fuller of TOPS Knives and through joint work and development, initiated the manufacturing process. Kelly just wasn't a quitter!

After showing his prototype at the 2012 Shot Show, Kelly and Kami were able to introduce their new system. The reception for the Battle Blades System was most enthusiastic from military and outdoorsmen alike. 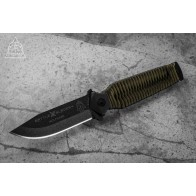 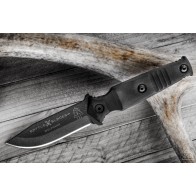