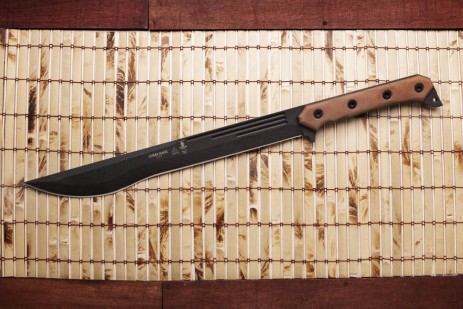 The C.U.M.A. KAGE is finally here!

The KAGE (Pronounced KU-MA KA-GAY), means "Shadow" in Japanese. The name is drawn from one of the designer's lifelong passions, GI JOE: the Arashikage (Storm Shadow) Clan.

SIJO Waysun Johnny Tsai is a lifelong martial artist and world-renowned self-defense instructor. Riding off the success of his wildly popular TOPS Knives release, the C.U.M.A. TAK-RI, and its connection to the GI JOE Ninja Commando Snake Eyes, Sijo wanted to create something that he has sought after since his childhood, a functional Snake Eyes Sword.

Wanting to show influence, but not wanting to make an identical sword to the comics, Sijo drew the sword to his favorite Escrima stick length, 24". Through years of training Sijo has found that 24" is a perfect length for close range combat with an edged weapon or stick.

He then changed the tip and added a striking Punyo tip to the handle. Sijo didn't just want a short tactical sword, he wanted to create a bush sword that could replace an axe, one that could fell a tree as well as remove an enemy's limb in combat. Once satisfied with his initial hand drawings, he sent the sketches to his good friend Roland III of FOX KNIVES USA fame to transfer the hand sketch to a digital format.

Once the artwork was complete, Sijo landed back with his family at TOPS KNIVES. Over the next two years, Sijo and TOPS created a prototype and at the suggestion of Leo Espinoza and Craig Powell, TOPS added some fullers and holes to the handle to lighten the weight of the sword, Outside of the new fullers and holes in the handle, the sword's CAD file was created from the original hand and digital drawings provided by Waysun Johnny Tsai and Roland Hinojosa III.

The C.U.M.A. KAGE is finally here and Sijo could not be prouder of the final product that TOPS KNIVES has delivered.

Balanced, Heavy, Capable
The metal loop location makes for a surprisingly balanced carry. The end of the knife doesn't whack me in the knee every time I take a step. I use a lanyard with a friction hitch to waist wrap it.

If your looking for an efficient work horse try the YACAR, as this knife is more oriented toward a Bootlegger II. It is a thick, heavy, and capable fighting weapon. Otherwise, I would recommend a 12 Gauge, as I don't like hand guns.

I do not regret purchasing two.

Review by John (Posted on 6/21/2021)
A proper Short Sword
I live in England and collect TOPS Steel via the UK dealer, I also collect modern short swords. The Kage is a classic modern design and looks great but more importantly it’s an absolute beast. The blade is a very rare example of a heavy, strong blade that’s also razor sharp. It feels a little heavy at first but gets lighter as you start to use it, it is certainly usable as an axe replacement. The rules here in the UK don’t allow you review possible “tactical” uses of blades but as this is a US site .... this is a really very naughty item. It feels perfect for charging into battle with and certainly gives you a feeling of confidence to hold it. Review by Deimos (Posted on 8/4/2020)
Most beautiful steel Angel
WOW WOWSERS having tops knives products this short sword is the most used in my collection in just one week. Performance in Bushcraft is outstanding. Would take into the most isolated areas only added a lanyard on the handle for retention purposes. If you order this gorgeous angel get the serrations and rocky mountain tread grip pattern it is worth it. Quality build and performance is way over the highest mark. Thank you tops knives Review by Andrew (Posted on 5/29/2020) 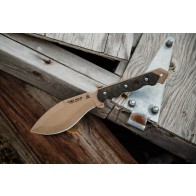 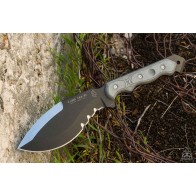 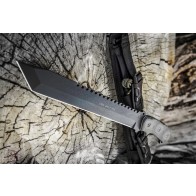 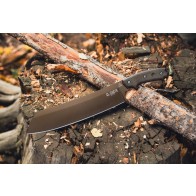 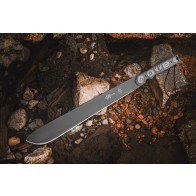