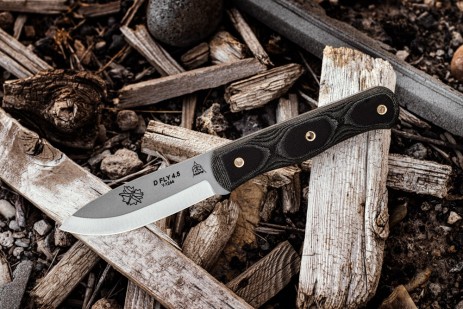 Straight Out of the Canadian Wilderness

Caleb Musgrave is a wilderness skills instructor of the Mississauga Ojibway Nation in Ontario Canada. Caleb has traveled across much of Canada and the eastern United States and has received training from some of Canada's best survival instructors, including countless Native elders. Caleb has spent three-quarters of his life enveloped in bushcraft. Caleb currently lives in his home community, the Mississaugas of Rice Lake, where he has run the wilderness school Canadian Bushcraft since 2008. His straight-shooting style of education, mixed with his wry sense of humor has made him a fan favorite amongst his students and colleagues.

The D Fly 4.5 Knife:
In Canada, carrying a combination of axe, saw, and knife is far more common than carrying just one large blade. This frees the knife to be much smaller and far more nimble since the large chopping and processing jobs are left to the other tools. A bushcraft knife must be light enough for fine detailed carving tasks (making netting needles, friction fire kits, and the like), while being functional enough to be able to skin and process both small and large game animals, from mouse to moose so to speak. However, that nimbleness must be matched against unfailing strength. Fall through the ice of a frozen lake with no one around? The knife must be strong enough to be an anchor for you while you save yourself.

With all of these requirements, it's great to know that the D Fly 4.5 Knife fits the bill! Caleb spent the last seven years slowly breaking down (literally) every knife he owned and deciding what he did and did not like. The D Fly 4.5 Knife is an amalgamation of everything that has passed Mr. Musgrave's scrutiny. Though the blade may bear some resemblance to other bushcraft knives (he wasn't trying to reinvent the wheel) it is the numerous, subtle, tactile differences that set this blade apart.

With a 4 1/2" long, 1/8" thick bead-blasted blade, the knife is definitely not too long, nor weak. In fact, with an overall length of 9 3/4", this knife is sleek and sturdy. With no epoxy coating on the blade, the 1095 high carbon steel is fully exposed to allow the woods wanderer the ability to strike a spark effortlessly- whether with a ferro-rod, or a shard of flint. With its contoured handle made of black canvas micarta and white liners, the D Fly 4.5 matches, comfort and utility with beauty and art. The handle is very slim (3/4" at the palm swell), but fits perfectly in a big meaty hand or in the mitt of a youth first learning woodskills. These little points of detail, borne of experience and calloused hands, qualify the D Fly 4.5 as the long-awaited Official Canadian Bushcraft Knife. Carried in its rugged TOPS' quality Ballistic Nylon sheath, the D Fly 4.5 Knife is a great bushcraft companion and will be by your side, even after years of use and abuse, that is, until it is passed down as an heirloom to the next generation of buscrafters.

Great Knife but.......
This is my first TOPS knife. My first impression was that this knife is lighter and a little smaller than it looks in pics and videos. Should work great as a skinner. Great medium drop belly profile. The knife is lighter than I expected. Blade is thin at 0.120" which is why it's so light. The smooth bead blast finish is quite smooth and slick. Can not feel any roughness when dragging a finger nail across it. Knife over all looks great as does the Scandi grind. This blade is sharp as a razor and has a 1/3 Scandi flat grind. The blade spine has been ground flat to produce squared edges great for striking a fire rod.
This knife is lighter and thinner than it looks. The handle thickness is 0.700" at the widest point, which slightly narrows due to the slight scallops (0.650” wide) between the three hollow brass (0.190") handle pin tubes. Love the general rectangle feel and narrow taper cuts at the front of the black micarta. I wish the micarta had a rougher surface finish as it feels a little slick even with all the oil removed. Wish this handle had their Rocky Mountain tread cuts on the micarta. I didn't know about this feature option prior to my purchase. Should be a great skinner and camp knife due it's light weight.

The bad
My knife was shipped with a nice black leather dangler sheath and ferro rod, rather than the Cordura version shown in the pics and I was expecting. The only real complaint I have is that the sheath had so much oil on it, it soaked the canvas micarta! I had to wash the entire knife and handle five times in Dawn soap to get most of the oil out of the scales. A week later and still out of the sheath, the scales are still leaching oil out. TOPS should know better than to ship a sheath that is absolutely soaked in oil for a knife with micarta scales. It was so wet with oil...... it would drip off when the sheath was bent in half! That's ridiculous! Other than that.................I love this knife. Very light and allows a lot of control for precise cuts using a pinch grip on the narrow front taper of the handle. Even though the handle is quite thin........The lower edge profile contour is perfect for my med/large hands. Plenty of gripping surface. There is no front finger guard............. so user beware!

Great job on the knife. Not so great on the sheath prep.
BTW...........I bought another TOPS knife (Tex Creek 69) at the same time and it's sheath was also soaking wet as well and it soaked the micarta scales on that knife too. Shame on TOPS. I'm plan to store both sheaths in white rice for a while to hopefully absorb the oil out of the sheaths.
Review by Michael (Posted on 2/13/2022)
“Top” knot has field knife
I have had mine for two years know and used it for camping, hiking and hunting. I’ve used it in the kitchen on tomatoes to frozen meat. The edge is outstanding. I’ve only had to use a strop to keep it at a nice razor edge. I whittle as a hobby and have used it to make some 6” totem poles for my kids. Easily one of my favorites around the camp fire whittling while telling cowboy stories to the kiddos. Review by Brad (Posted on 1/6/2018) 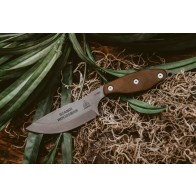 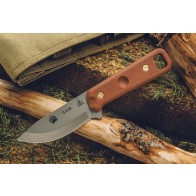 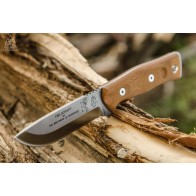