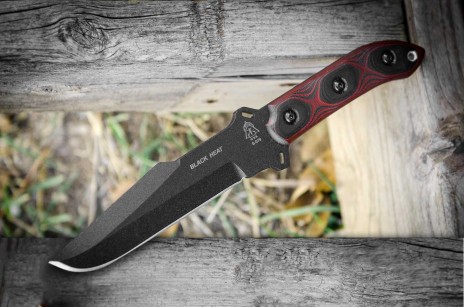 strong enough for men of the USMC

The Black Heat is a heavy-duty, rugged tactical knife designed with input from US Marines for US Marines, but you don't have to be a Marine to own this great blade.
SKU: BLKHT-01

Standing ready 24 and 7, the Black Heat is honed with respect, pride, and admiration for the US Marines.

With a Motto like "The Few, The Proud" and a long-standing record of being one of the world's most effective fighting forces, many a young man takes the challenge to become a Marine. Many try, but only a few succeed. The USMC has served in every American armed conflict and has attained prominence as a formidable fighting force. With nicknames like Devil Dogs, Jarheads, and Marine Raiders, their tough attitude precedes them. Their game plan is simple, yet very effective. "Improvise, Adapt, and Overcome". So strong is their brotherhood that they believe "Once a Marine, Always a Marine". And last but not least, their common greeting and farewell "Semper Fi".

Always faithful, the Black Heat knife was designed with substantial input by many close friends who have been Active Duty Marines for most of their lives. US Marine Corps, we salute you!

Solid/lifetime quality , sharpness is a joke
This knife is solid as a rock and this quality will last me a long time. I love the look and feel, the handle isn’t too fat and for my medium size hands that’s perfectly fine. It looks absolutely mean as well.

Now for the bad part. Sharpness out of the box is a absolute joke, for a company that makes so much noise about being usmc/military favorites that is unacceptable. The price is such that this should never have been this dull, and it’s annoying because other than that this knife is a quality product.

My first TOPS hopefully one of many but sure hope their sharpening department only had an off day because this is no bueno.
Review by Maarten (Posted on 7/7/2022)
Love the knife, not fond of the handle
Would call this a great knife if the handle was a thicker.
This knife seems to twist a bit when chopping.
I have big hands so might not be a problem for all.
Review by T. (Posted on 8/21/2015)