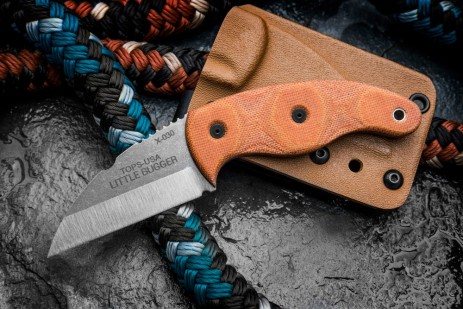 This might just be your next EDC.
SKU: LILB-01

The Little Bugger was designed by Matt Graham, who is much more than just a “survivalist”. He is an athlete – ultra-marathons, triathlons, rock climbing, etc., a martial artist – several styles, and an expert in primitive weapons, hunting, and shelters. He has more “dirt time” than almost anyone else out there.

It’s made of 3/32” 1095 steel with thin tan canvas Micarta handles and black liners. The knife weighs in at about 2.4oz. The sheath, also lightweight and minimal weighs less than two, giving you a total package of less than 4oz. The narrow j-clip on the sheath is great for wearing this on a belt or on a pack. It can also be worn with most shorts without falling off. The thin, straight blade is complimented with TOPS’ modified Scandi grind, making this knife razor sharp with a proven utility-style blade.

Amazing Knife
Amazing knife. Use as my EDC and etc. Works great on Velcro belts or any belt. Great durability and blade. This knife will last you a lifetime. Review by Nathaniel (Posted on 2/28/2021)
Little Bugger Sheath Clip
I love my Little Bugger with the exception of the kydex sheath clip. It is flimsy and broke with simple wearing on my jeans.I created my on sheath attachment but a poor clip from manufacturer.


Review by Donald (Posted on 1/30/2019)
Great knife with caveats...
So I received this knife very recently. It is a great size, very lightweight, and I love the sheepsfoot-ish/wharncliffe blade shape and size. I use it for boot carry, and have been through about 20 different boot knives lookimg for the perfect one. This one is close.

Weight is exceptional. Light even for it's size and is full tang 1095 and micarta construction, so you know it will outlive you. Brown color of handle and sheath blend in nicely with leather boots.

Fits pretty well in the hand (better for smaller hands, the swell is in a weird spot for me, requiring holding it only one particular way. A little weird, but I have no problem with that.

My only real problem is with the grind. I have heard wonderful things about Tops and sharpness out of the box. I love 1095 because of how sharp it can get (and I'm used to sharpening it), and look for American made when at all possible. Awesome.

Then I pull it out of the sheath. The grind is a disaster. Not sharp at all for a high end knife. Sharpness on par with chinese stainless. Worse than that, well... WAY worse than that is how this edge is not straight at all. It has a slight "recurve" in it and a lack of a real point (despite the blade type that should have a nasty tip). I am decent at sharpening but will never be able to get this thing straight or put a proper point on the tip.

Just so dissappointing. To think I found the blade I have been looking for, only to realize the search is still on. I have not lost faith in Tops, but I won't buy another one unless I can look it over in person. I fear Tops may suffer from some of the same QC problems that plauge other American makers like Ontario and Buck.

A legitimate grind and this thing would be perfect. Review by KEVIN (Posted on 9/6/2018)
Great edc
Have used the knife for a week. Great carry system. Fits hand well, one work horse of a knife . Would recommend it to all, Does fine at all task love the blade shape. Cuts great just a great knife for people on the go. Review by Charles (Posted on 7/14/2018) 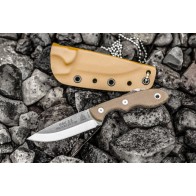 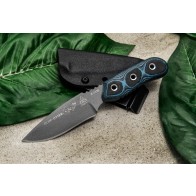 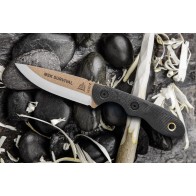 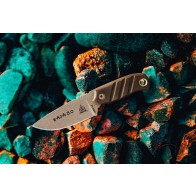